There is an intimate, understated gallery on the third floor of 95 Empire Street in Providence, RI. This once-abandoned industrial space is owned by the neighboring art organization, AS-220, and features illustrations by Carl Dunn. 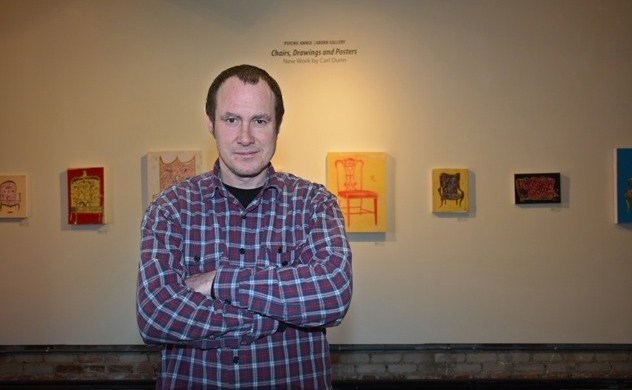 Carl’s art is intrinsically thoughtful; and while each piece is powerful enough to stand alone, the exhibit is unified by his signature eccentric style.

Mr. Dunn studied at the prestigious Parsons School of Design in New York City and spent a semester developing his craft in Paris.  His work has been featured in Bloomberg Business, The New Yorker and Rolling Stone.  Carl is well-spoken, insightful and engaging.  Like many, he spent the holidays visiting with family.

While Carl’s quiet existence may seem insipid it is anything but: Less than a year ago, Carl was homeless; living on the streets, begging strangers for spare change, debilitated by mental illness and addiction. His unique artistic perspective is magnified by the difficulty of his journey.

In 2010, after a series of disagreements with his girlfriend and their landlord, Carl found himself without a home and unable to make a living – his art supplies had been thrown out along with almost all of his clothing and possessions.  Without a cell phone or address, he lost touch with his art-buyer clientele and his life quickly spiraled into squalor.

This man would wander the streets of Providence for the next four years in complete despondency. He slept in entryways and abandoned houses and ate out of trash cans, all while battling crippling, acute behavioral health problems.

“I knew something was wrong with me, but I wasn’t sure what,” Carl said. “I was seeing and hearing things that weren’t really there. So, I anesthetized myself with alcohol.”

He was diagnosed years later with psychosis, severe anxiety, and major depressive disorder.

Living on the streets, Carl continued to combat his chronic mental illnesses the only way he knew how: by drinking.

“Eventually, my entire life revolved around drinking; it was all I cared about.” Carl said. “As soon as I would wake up, I would take whatever money I had from panhandling and go to the liquor store.  I’d drink around a half-gallon of vodka every day.”

A half-gallon of vodka – that’s the equivalent of consuming about 40 drinks at your local bar.

“I assumed one night I would drink myself to sleep and not wake up,” Carl said. “And I was ok with that.”

Then one day, a woman driving through the city lowered her car’s window to speak to the unkempt man holding a sign on the side of the road.

“Are you Carl Dunn?” she asked.

This woman, an employee of The Providence Center (TPC), told Carl that a friend had put him on the waiting list for TPC’s Home Base – a program that supports homeless individuals who have co-occurring mental health problems – and encouraged him to get help.

Carl attended a few meetings at Home Base but eventually stopped going and continued to heavily imbibe.

Fortunately, Home Base Assistant Manager Dave Gendreau did not give up on his client. Dave tracked down Carl and told him that if he continued to attend his appointments at The Providence Center, it was likely he could be given an apartment.

“It took several conversations over the course of a few years to get Carl to believe we could help,” Dave said.

The police found Carl intoxicated and dejected in an entryway one night last summer. He asked to be taken to the hospital, at which point, he entered into detox.­­­­­

“When I got out of detox, I remembered Home Base.” Carl said. “So I went there instead of straight back to the liquor store.”

Finally, Dave’s persistence had paid off and Carl took responsibility for his recovery.

“Carl doesn’t give himself enough credit,” Dave said. “He was the one who stepped up and took action.  And once he did, we were there for him.”

When he arrived at The Providence Center, a psychiatrist helped sort out his medications.  Then, Home Base Manager Tracey Correia contacted Mosaic House – a Providence Center transitional home for people battling substance abuse – and he was admitted that night.

“I wanted to go get cigarettes before the people from Mosaic House picked me up.” Carl said. “Tracey insisted on going to the store with me.  She gave me support so I wasn’t tempted to buy alcohol.”

Carl identified Tracey’s attentiveness as, “a perfect example of the how the people at Home Base take an active participation in their clients’ recovery.”

Carl elaborated on the effectiveness of Tracey’s method.

“She knew how important it was to get me into the transitional house immediately. If she hadn’t, I know I would have started drinking again that night.”

Once at Mosaic House, Carl began taking the medications as prescribed by the psychiatrist. He was amazed at the results.

“Normally, I couldn’t walk by a liquor store or a bar without going in, and I was thinking about drinking 24/7, but now I felt like all of that was gone.”

The team at Home Base went to work to secure permanent housing for Carl.  The goal was to keep him in transitional housing until an apartment was ready.

“Tracey refused to let me end up back on the street, even just for one or two nights.” Carl said. “I think that was key.  She made sure that I remained in the system during my early recovery and looking back on it, that was instrumental in my success.”

Success. Since being released from Mosaic House and moving into a TPC sponsored apartment, Carl has maintained sobriety and rediscovered his former profession. He recently sold several pieces of artwork from his new gallery.

“Art has really helped in my recovery, it’s given me a sense of purpose,” he said.

Despite the turmoil Carl experienced over the last five years, he avoids his former pessimism.

“I don’t think that way anymore. I am so lucky. It’s a miracle, everything that’s happened to me.”

After saying this, Carl began to pick at the short fingernails on one of his large weathered hands.  He looked down, shook his head and let out an introspective sigh.

“Honestly, if it wasn’t for The Providence Center, I’d be probably dead,” Carl said. “I wouldn’t have survived another winter on the streets.”

Then, he looked up.

“I’m so grateful for what they’ve done for me.”